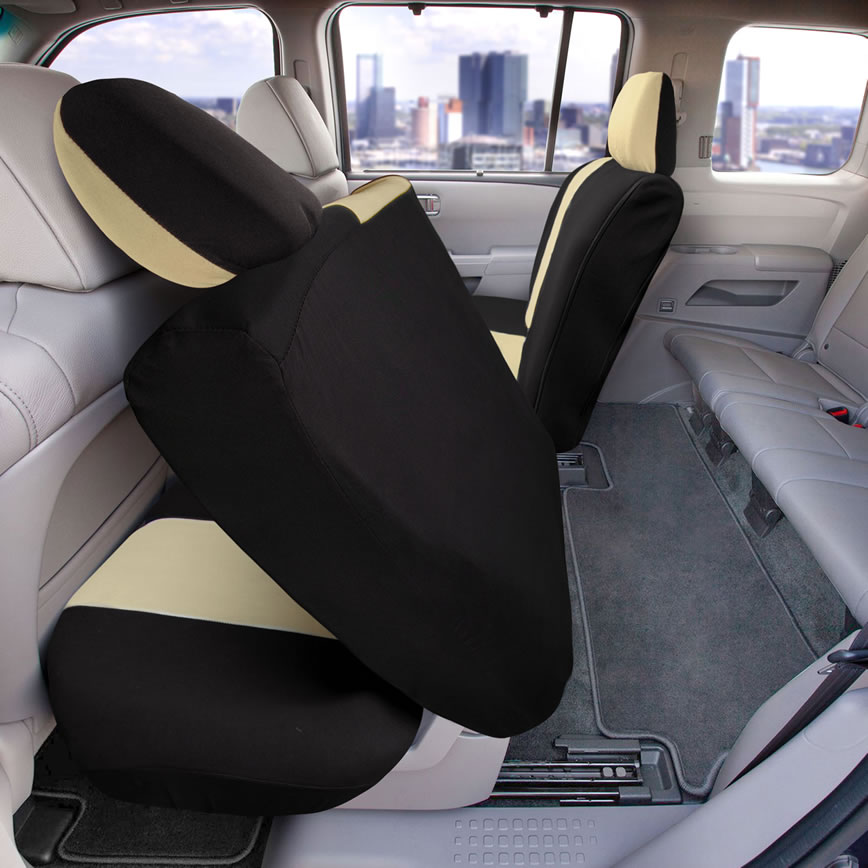 Well, the answer is: almost all of them. No matter how much you’re paying and no matter how great the seat covers look, the back of your rear bench is left exposed. Not only does this leave the back of your bench unprotected, it also leaves all of the hooks and straps that keep the cover in place out in plain view for everyone to see.

In some vehicles, you don’t even notice this. But in others, mainly SUVs and minivans with three rows of seats, it’s impossible to ignore. If your bench seat is built in to the rear of your car, like most sedans, you never see the back of your rear seat anyway. You’re probably thinking, “What’s the big deal? No one ever even looks at it.” In the case of three-row vehicles, the person in the last row is always looking at it.

That’s not to say this is an issue exclusive to vans and SUVs. This problem also pops up a lot in hatchbacks, where the back of the rear seat is visible through the rear window. And even beyond that, any vehicles with split benches are going to suffer from an exposed backrest whenever the seat is folded down. 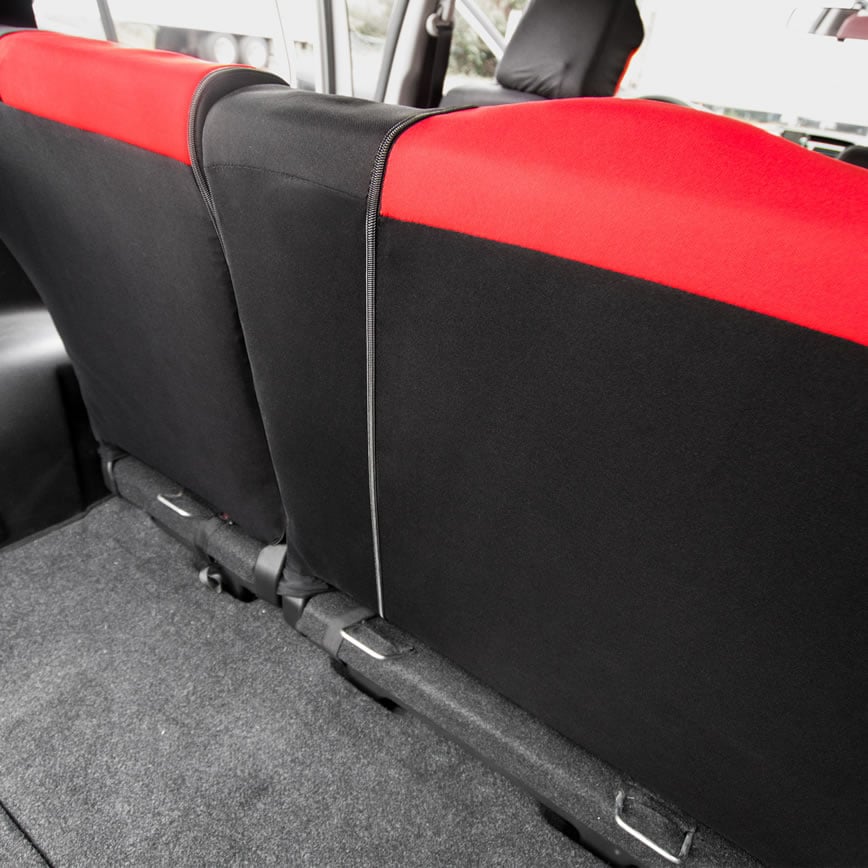 While it’s not a problem for some and a mild inconvenience at worst for others, there are drivers out there who are suffering more than you’d think. It’s like that saying, “One man’s trash is another man’s treasure,” except this is more like, “One man’s papercut is another man’s worse papercut.” Like the kind that are so tiny that you can’t even see them, but they hurt a million times more. Kind of like that.

But finally, after decades of innovation in the auto accessories industry, there exists a solution to this problem – a full coverage bench seat cover. It does exactly what it says on the tin. The entire rear bench seat is covered, including the back. No more unsightly hooks, clasps, buckles, straps, you name it. That in itself is quite the accomplishment, but what about a full coverage bench seat cover that accommodates a split function? That’s a lot to ask for.

As it turns out, all this asking has finally resulted in just that. The response from consumers has been phenomenal. Buyers are raving about finding a seat cover that actually covers the entire seat. In a few years, we’re all going to look back on this and wonder why all universal seat covers weren’t designed like this in the first place.

But for now, this is totally worth celebrating, and people are excited to finally have it.

Take Nick from Rhode Island, for example. Nick drives for Uber as a full time job. His Ford Explorer has three rows of seats which is awesome for picking up more clients and making more money, especially with the new carpool feature his employer has rolled out recently. What’s not so awesome is the riders who have had a little too much to drink on Saturday nights, leaving their mark on his seats in the form of regurgitated nachos and tequila.

At least it would make the trips memorable, but Nick wasn’t happy about it. “I had to find a way to protect myself,” he says. “The company pays for any cleaning expenses, but then I can’t work while I’m getting it cleaned. I’m losing money at that point.” With Uber as his sole source of income, this was a problem.

Nick looked into seat covers for his Explorer, but all of his options left him unimpressed. “I couldn’t find anything that covered the back of my second row,” he explains. “My ratings depend on my truck looking good. I don’t want people coming in here and thinking it looks sloppy. I need to look professional.”

With that in mind, it makes sense that Nick wouldn’t want his riders staring at the back of his second row bench, exposed and revealing the straps and hooks used to keep the seat cover in place. After all, first impressions are everything. And in the case of Nick’s job as an Uber driver, the first impression is often the only one his customers get.

For Nick, a full coverage bench seat cover was exactly what he needed. “It was like it came down right from Heaven.” Finally, he could protect his seats from unruly riders without running the risk of giving his customers a perfect experience. With his entire bench seat covered, his riders are spared the less-than-impressive view of hooks and straps, leaving them to base their judgments on Nick’s performance. His ratings have been stellar.

Plus, the full coverage bench seat cover had an unexpected bonus: “Someone in the third row ended up puking the other night. The back of the seat cover just took it like a champ. It’s so much easier to throw it in the washer than it is to get the whole car professionally cleaned.”

Not everyone has inebriated strangers riding in the back of their vehicle, but kids can be just as destructive – maybe even worse.

Wendy from Ohio has kids. Five, to be exact. Her Kia Sorento is always a full house. “Sometimes I feel like I’m the ringleader at a circus,” she laments. “They’re good kids but the three hour ride to Grandma’s house always gets them restless and then all bets are off.”

It makes sense. Children are prone to getting antsy on long car rides. No parent is a stranger to the whining, the petty bickering, or the synchronized chorus of, “Are we there yet?” on repeat.

“With five kids under 13, it’s a lot of arguing,” Wendy says. “My oldest sons love to tease the younger kids and sometimes it just escalates. Shouting matches, throwing snacks, that kind of thing.”

But Wendy has a bigger problem than the Goldfish crackers sailing through the air.

“Whoever’s sitting in the last seat, sometimes they kick at the back of the seat in front of them.”

Kids aren’t very well known for their pristine footwear, and Wendy’s children are no exception. Muddy sneakers from playing tag in the backyard, rain boots drenched from playing in puddles, shoes caked with dirt from baseball practice, gum stuck to the bottom of sandals, cleats with bits of grass and soil hanging off from the soccer field – Wendy has seen it all. And unfortunately, so have the back of her seats.

Wendy is no stranger to seat covers; with a small army of tiny savages in her SUV all the time, she was quick to take precautions against the inevitable catastrophes that come with children. Her bench seat covers protected her seats for the most part, but still left the back of her second row vulnerable to the relentless kicking of angry little feet. 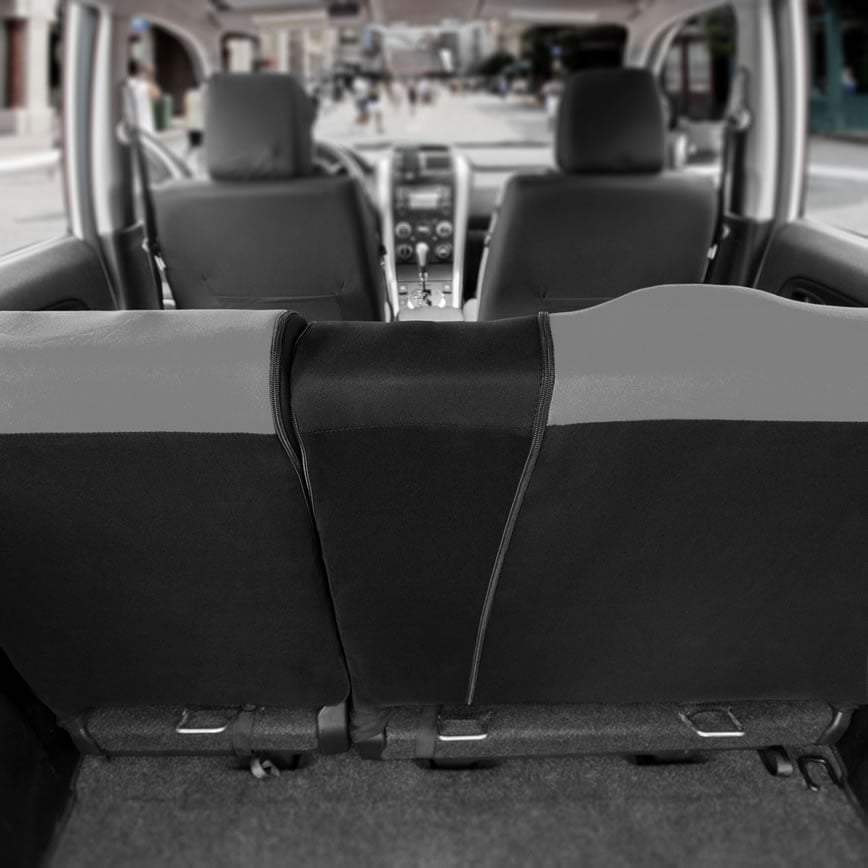 Fortunately for Wendy, her discovery of a full coverage bench seat cover saved the day – and the back of her seats. “It’s a godsend,” she wrote in her review. “It doesn’t matter if you’re SuperMom, sometimes kids are just unpredictable…especially when they’re just out of reach of Mom and Dad. They think they’re invincible. And the five of them, they just feed off each other’s energy.”

Since the addition of a full coverage bench seat cover to her SUV, Wendy’s job as Mom Chauffer Extraordinaire has become less of a losing battle. “At least now I don’t have to worry about the seats,” she says. “Most of the time, they’re well behaved. It’s just that ride to Grandma’s…three hours. I’m not sure if it’s worse for me or for them.”

At the very least, now Wendy can rest easy knowing it’s not worse for her Kia Sorento.

Nick and Wendy both found full protection to save their seats from anything, be it a minor inconvenience like restless feet or an all-out disaster of epic proportions like playing taxi for a client who takes their bad decisions out on your seats. But for some people, it’s not even about the protection. They just want their vehicle to look the best it possibly can.

This was the case with Kyle from California. His Scion iM is perfect for hauling around his DJ equipment to and from gigs, thanks to its spacious cargo area and a rear bench that folds down for even more room. “It’s awesome for holding all my stuff,” he says.

Kyle explains, “People think being a DJ is just fun and games, but it’s real work. It’s fun work for sure, but you’re still putting everything you have into it.” He often doesn’t come home from his shows until the wee hours of the morning, which leaves him drained of all energy. But even after his night of work, he still has to carry his equipment back into the house. “I can’t leave my equipment in the car like that. I have to park on the street. That stuff is expensive. I don’t want to risk someone taking it.”

After the combined labor keeping the party going for hours and lugging his kit out of sight from thieves (which takes multiple trips to and from the car carrying the heavy equipment) Kyle simply finds himself too exhausted to do any more than the bare minimum. “Once the last thing is inside, I just pass out. Lights out. Bedtime.” Who could blame him?

For the sake of convenience and his sanity, Kyle figured out how to fit everything in his Scion iM with only one half of his bench seat folded down. It took some brainstorming and very precise positioning of everything, but it allowed him to get everything in his car while leaving one seat open for a third passenger. Conveniently enough, Kyle usually has a total of three people in his car: “It’s just me and my girlfriend and her daughter.” He decided to permanently leave the half of the seat folded down.

With that problem solved, another arose. His seat covers only covered the front of his bench seat. With half of the seat folded down all the time, the straps and buckles holding his seat covers in place were constantly on display. “It was just ugly,” he says. “You have these beautiful seat covers and then half of the bench looks like a construction zone.”

Kyle eventually started covering up the folded down half with a blanket to conceal the straps. Another crisis averted…and another problem to take its place. Every time he would load his DJ equipment in the car, the blanket would interfere. Getting everything loaded up was already a tight fit (“Like playing Tetris in real life,” he mentions) but the blanket bunching up as he very carefully placed his kit was only making things harder for him.

“I was ready to give up. It was so frustrating.”

When Kyle happened to stumble across a full coverage bench cover, suddenly everything clicked into place. “Now that the whole bench is covered, it looks amazing. With the one side folded down, it’s still covered up and it matches the half people sit on.” Which means no more straps, no more exposed back of the bench, and most importantly, no more blanket.

“It’s the greatest thing that’s ever happened to my car. Everything looks great, even with half the seat folded down all the time.”

Along with Nick, Wendy, and Kyle, countless other consumers have switched over to full coverage bench seat covers. These full coverage seat covers solve all of their problems, and sometimes even ones they didn’t know they had.

For years, the full coverage bench seat cover was something of a myth. But with the ever-growing advancement in the industry, they are now a reality. And the positive impacts being made on consumers’ lives are just as real.

Join the thousands of people who made the choice to make their lives easier. Shop for FH Group’s full coverage bench seat covers now on our website. You can thank us later.