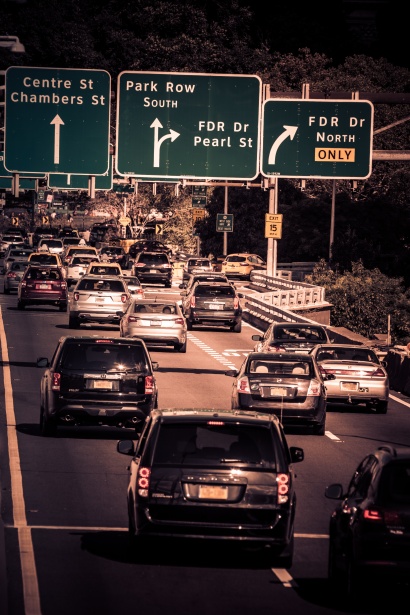 Life has its way of throwing a lot of abuse at us.  Sitting in traffic is probably one of the worst kinds of this torture, even more so when it’s happening at 8 in the morning on a Monday on your way to work.  You know what I’m talking about.  I’m talking about…

The bane of every adult’s existence.  The bumper to bumper traffic, the people blaring their horns when you have nowhere to even go, the cars that apparently didn’t make it off the assembly line with working blinkers – it’s a depressing experience, to say the least.  It’s a collection of all the worst humanity has to offer and the daily dose of road rage it inspires is definitely not the best way to start your day.  But believe it or not, it doesn’t have to be completely awful.  There are ways to make it bearable.  Dare I say even…enjoyable?  Okay, you’re right.  That’s pushing it.

Here’s how to survive your morning commute.

There’s no better way to get rid of the morning blues and distract yourself from the misery of traffic than some good ol’ car karaoke.  And I don’t mean just listening to the radio.  I mean make yourself a playlist of your absolute guiltiest pleasures – songs you know every word to but wouldn’t dare let anyone catch you singing.  My personal favorites are Britney Spears and The Beastie Boys, but your tastes may vary.  Turn up the volume and go crazy.

Don’t worry about the other people around you.  Sure, they might be looking at you like you’ve lost your mind, but one of you is miserable and grumpy and one of you is jamming out to some sweet tunes and having fun.  Spoiler alert: you’re not the miserable one.

If you lack the energy in the morning for an all out concert in your car, podcasts are a pretty good alternative to tune into and zone out the traffic.  There are literally thousands out there, ranging from comedy and politics to ultra specific topics like unsolved mysteries and true crime.  If there’s something you’re interested in, there’s a podcast in this universe waiting for you.

They’re useful for catching up on recent events, brushing up on your Spanish, getting some advice on flirting, or even learning some obscure fun facts about Malaysian tigers you can impress your coworkers with over lunch.  As an added bonus, you won’t look as ridiculous listening to a podcast as  you would singing to Mariah Carey at the top of your lungs.

Stay in your lane

We’ve all seen that one guy who’s weaving in between lanes in heavy traffic and only ends up one or two cars ahead.  Sometimes he even ends up falling behind while the lane he just left lurches forward.  And then we smirk smugly to ourselves and think, “Was it worth it?”  Sometimes this satisfaction quells the beast in us, calming us down enough to not hop out of our car and smack the offender over the head with one of our floor mats for cutting us off.

But the thing is, sometimes we get restless and the temptation to do commit this cardinal sin ourselves is a little too strong.  I’ll admit it – I’ve been that guy.  You’ve been that guy too.  You don’t need to lie to me.  Let’s just make an oath right here and right now to not be that guy anymore.

It’s not a race

You  know when you’re in gridlock traffic, like absolute dead stop, not moving at all, ready to rip your hair out, and when you finally start moving 20 minutes later expecting to see the source of the traffic jam there’s nothing to be found?  It’s kind of disappointing isn’t it?  All of that for nothing.  Not even a consolation prize to gawk at and gossip at the water cooler.  What a bummer.

There’s actually a name for when traffic seemingly materializes out of nowhere.  It’s called a traffic wave, and it’s the worst.  It’s caused by one person braking suddenly, causing the person behind them to brake suddenly in response so that they don’t rear end them.  Then the person behind that person has to do the same, and this causes a rippling effect in that lane that eventually causes bumper to bumper traffic.

Eventually, you get That One Guy who gets impatient and cuts off someone in the next lane over, who now has to brake suddenly.  Now the person behind them has to brake suddenly too, and then the person behind that person, and now there’s a rippling effect in this lane too, which inevitably causes some another variance of That Guy to swerve over into the next lane, causing another rippling effect.

Eventually, you’re stuck in a traffic jam that makes you want to scream out words that would make your grandmother blush.  While your impatience may lead you to be That Guy, remember, we already promised each other we’d stop that.

So what’s the solution here?  Chill out.  It’s not a race.  Ease off the gas and leave some room between you and the car in front of you.  And if That Guy takes that as an invitation to swerve into your lane, let him and create some more space between the two of you.  You ideally want to reduce your braking as much as possible.  That’s what got everyone into this mess in the first place.

There’s this one old school Chevy Impala that I see on my way to work every morning.  We usually “meet up” where I hop onto the main highway and hang out all the way until I get off at the exit to the city I work in.  It sounds goofy but I actually look forward to seeing him (or her?) every day and sometimes I get a little bummed out when I don’t.

Try to keep an eye out for a familiar face -or in this case, car- and see if you can make some commute buddies to chill with while you’re sitting in traffic.  Who knows, maybe you’ll catch them participating in some car karaoke of their own.  And if nothing else, it’s nice to know you’re suffering together.

Look, if you’re going to be stuck in your car for the next 45 minutes, the least you can do is make sure you enjoy it the best you can.  Surround yourself with things that make you happy…or as happy as you can be in traffic, anyway.  Stick  your favorite air freshener to your air vents.  Slip some sweet leather seat covers on your seats.  Put one of those little hula girls on your dashboard to keep you company.  Grab a coffee on the way to work and sip on it every time you feel like yelling in frustration.

It’s the little things that make all the difference in the end, and going into the venture with the right mindset is the first step to success.  If you can at least climb in and buckle up feeling good about sitting in that seat, you’re already on the right track.  Plus, coffee makes everything better.

And that concludes the Ultimate Morning Commute Survival Guide.  Of course, you’re always free to stick to the usual methods of shooting daggers from your eyes at every other driver on the road and clenching your fists hard enough to leave indents on your steering wheel cover if you prefer.  Road rage is pretty trendy, after all.